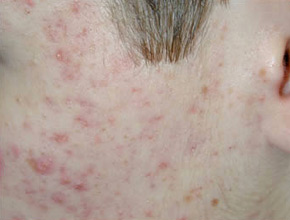 Acne is a chronic disorder of the hair follicles and sebaceous glands. Acne causes clogged pores which leads to pimple outbreaks, cysts, infected abscesses (areas of pus), and, sometimes, scarring.

Acne is very common — nearly 17 million people in the US are affected by this condition. Acne most often begins in puberty. During puberty, the male sex hormones, called androgens, increase in both boys and girls, causing the sebaceous glands to become more active and, thereby, increasing the production of oil.

How Does Acne Develop?

Acne progresses in the following manner:

Acne can be superficial (pimples without abscesses) or deep (when the inflamed pimples push down into the skin, causing pus-filled cysts that rupture and result in larger abscesses).

How Can We Help?

We would love to hear from you! Please fill out this form and we will get in touch with you shortly.